Morling and the Hoard

Drawing inspiration from the animals that decorated the armour of the Hoard, the maker designed 10 large scale ceramic sculptures of mythological godlike creatures that represent the deities that the Anglo Saxons might have worshiped.

The sculpture was hand built in Earthstone clay. This was then covered in a porcelain slip, which the maker developed to fit the body. The black detail was hand painted in a black underglaze.

Purchase of 'Morling and the Hoard' (2013) supported by a donation from Nicholas and Judith Goodison. 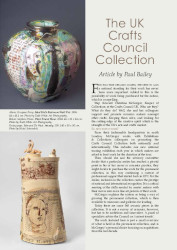 Working on Morling and the Hoard was a career highlight for me.

I had created several large scale installations previously; Stilted Life which won first prize at the 2010 World Crafts Council Triennial in Belgium, and Out of the House which was exhibited at Collect at the Saatchi Gallery, London in 2011.

Morling and the Hoard was a large scale project with a difference. This was the first time working on a project where the artwork was only one aspect of what we had to deliver. As well as creating ten sculptures, we also commissioned a stop motion film, an animation and ran storytelling and educational workshops at the Potteries Museum in Stoke-on-Trent. We also created a catalogue about the project and arranged the opening party. I worked very closely with Paul Bailey, Cultural Development Officer for Stoke-on-Trent Council.

We then submitted the animation to the Craft Council’s Reel to Real film programme and it was shown across the UK.

I was invited to come and visit the Staffordshire Hoard and create an Artists response. I was so amazed by what I saw and was struck by the fact that I was holding something that until recently hadn’t seen the light of day for centuries.

I was particularly drawn to the depictions of the animals that decorated the Hoard, what did they symbolise to the people who wore them on their armour? Perhaps the Anglo-Saxon’s thought that they were taking on the energy of these wild creatures, giving them greater strength and power in their battles.

So I took the tiny images from the Hoard and transformed them into the mythological god figures, brought to life in a kingdom of animal gods, who represent the power that the original decorations on the armour symbolized; protecting their charges in battle and bestowing power and energy.
Straight away as well of wanting to create the work in Ceramics, I really wanted the work to come to life and capture the viewers imagination. So I commissioned an animation to depict the story of the animal gods, how they rise from the Hoard and transform into mythological gods.

I wanted this project to re-imagine the story of the hoard, from Terry Herbert who discovered it two years ago, finding shiny jewels depicting strange creatures from the surface of the earth, to the creatures themselves being unleashed from the ground from where they have been entombed for millennium, coming back to life on screen, through the modern medium of animation.
We believe that the Anglo-Saxons thought that these creatures were magical, powerful and could protect them. Today I want to let the magic and the power of these beliefs shine again.