Photograph of J163b or c

"The Wearables” was a group of works that I made between 1981 and 1982. The name defined the object by its function and provided subject, source and use.

A Wearable was either worn or exhibited hanging on the wall alongside a black and white photograph of the object being worn. These images were taken for me by David Ward for this purpose and became integral to the exhibited work. The combination of object and photograph originally arose out of a desire to give the viewer a personal experience in a public situation where the piece could not be touched. You could look at the object on the wall and look at the photograph and know how it could be worn.

The black and white photographs brought out inherent characteristics of imaginary cinematic glamour to create a series of portraits. 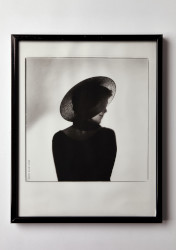